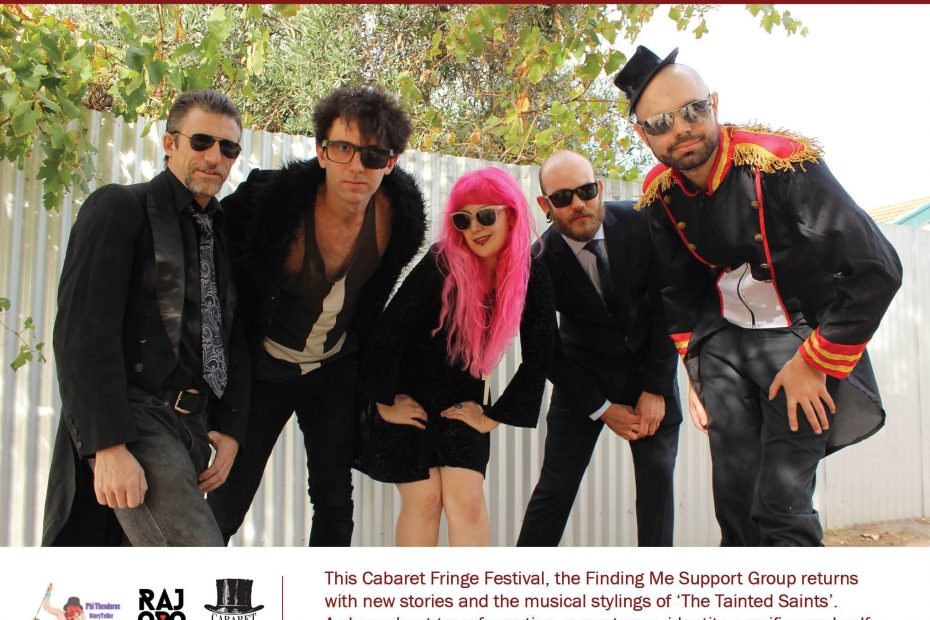 “Finding Me” is an original cabaret show written and performed by Phi Theodoros and James Dean.

Their last collaboration was “Depression The Musical”, which hit stages during the 2013 Cabaret Fringe Festival and hit the road for a Mental Health Week Tour in 2014. After a stellar debut during the Adelaide Fringe Festival in 2018, Finding Me is back with more original stories to share during the Cabaret Fringe, this time with a full band. Featuring Troy Benson on Drums, Marduk Gault on Guitar and Trevor Griffin on Bass plus James & Phi this new band, “The Tainted Saints”, are totally wicked and ready to bring some slinky cabaret vibes.

Phi fell in love with the performing arts at a very young age. At 13 she was a founding drama student at Ink Pot Arts in the Adelaide Hills and has performed with and project managed countless projects with them since 2004. In 2009 Phi made her cabaret debut alongside Anya Anastasia with the BirdWizdom Collective during the Feast Festival. These days as an Arts Worker in the community sector and a coordinator of community arts & engagement events Phi understands the transformative power of the creative. As an artist, she understands the power of stories and shares these with music to open conversations and challenge social stigma. Finding Me is her second full length show following the success of “Depression The Musical” in the 2013 Cabaret Fringe & its Mental Health Week tour in 2014. She’s thrilled to be working with such a highly skilled band and is ready to take Finding Me to a new level. Before we start, do you need a biscuit? Are you feeling supported?

James is a Painter and Illustrator based in Adelaide South Australia. He was professionally trained at the Panorama Art Group where he spent thirteen years learning the intricacies of Oil painting. This is also paired with a Bachelor of Visual Communication with a Major in Illustration at the University of South Australia. He’s also a highly skilled multi-instrumentalist and one of the driving forces behind the “Finding Me” team. James is the musical director of the show, creates many of the character concepts for the show and does all the graphic design work. James has survived working on two different productions with Phi and is going back for more, he’s earned himself a badge.

Marduk Gault – Guitar Marduk has studied flamenco guitar with both local and international artists he has dedicated himself to the art of flamenco, he has also spent many years working as street performer and guitarist across other genres. Joining the Finding Me band for Cabaret Fringe gives Marduk the chance to explore new styles and collaborate on original material that resonates with his own Finding Me story.

Troy Benson is one half of Cabaret Jazz Duo Orelia and a member of Pop Rock band Thom Lion & the Tamers. Having recorded, toured and perfomed extensively, Troy’s hybrid style has garnered attention, being described as a ‘kitsch assassin’ with ‘solid dynamic drum work’. With a love of theatre and a story to tell, Troy’s home this Cabaret Fringe is in “Finding Me.”

We also acknowledge the hard work of Trevor Griffin who was instrumental in the development of this show but was unable to perform during this season due to family commitments. He’s pictured in this great promo poster below:

To coordinate an interview, call Phi Theodoros 0401 517 082 or email storyteller@phitheodoros.com

See “The Tainted Saints” playing live, original music during “Finding Me” at Raj House at 7pm on the following dates:

The Tainted Saints – The band behind Finding Me Vol 2